This week has seen the fishing on the Lancashire coast improving yet again.

Codling are slowly increasing in numbers along the shores, as can be seen from the Fleetwood and District AC results below. The dogfish are slowly on the move to deeper waters as the night time temperatures drop. This means the anglers will be able to leave a bait out long enough for different species before the pesky doggies locate it.

A few plaice are showing off the North pier at the moment with Jamie Waight landing his personal best red spot of 2lb 1oz. Still plenty of whiting around all over.

The codling numbers are still greatest at the Clevelys and Rossall marks over high and low water times. There are still bass knocking about with some better fish among them. Bait of the week is black lugworm and ragworm again. 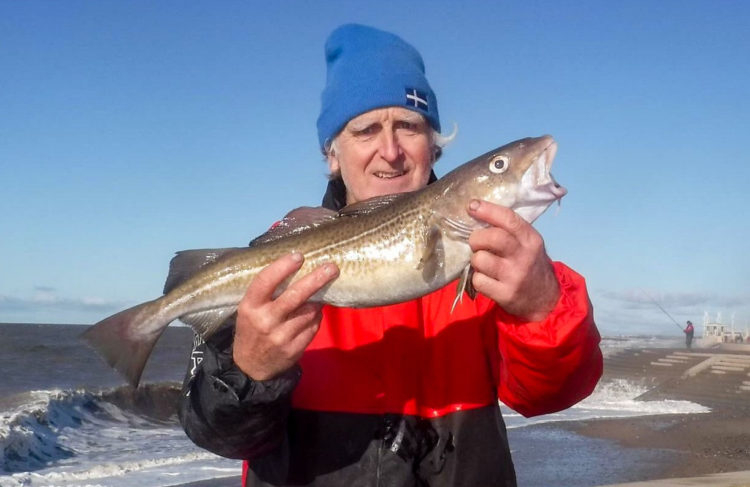 Fleetwood and District Angling Club enjoyed a successful match when they fished their Bob Gawne Memorial Open at Cleveleys.

69 anglers fished despite tough conditions which proved hard work. Luckily the rough weather did bring in a few codling together with bass, dogfish, dabs, flounder, whiting and pouting. The match was won by veteran North East angler Chris Stringer with a cod of around five pounds. Match secretary Kenneth Forest was second with a four and a half pound cod. The Club would like to thank all the anglers who fished and the sponsors Andy Whiteside, Tony Humphries, Neaves and the Rossall Tavern without who help the match could not have gone ahead.

Steve Wood fished the Gynn Wall with his mate using Jordan Russell’s sprat (whitebait) for bait. They had over 17 lesser spotted dogfish, whiting and a dab, all taken on the fish bait.

Brad Sim with his rare spurdog

Wyre Boat Angling Club member Brad Sim landed an unusual fish for this coast aboard Kevin Fletcher’s boat. His spurdog is one of the first land and picked up a squid bait.