written by David Proudfoot 10th May 2021

Chas Tibble headed out to sea from Lowestoft aboard Lead Us for his first post lockdown boat session targeting speedy smoothhounds.

It was great to get back out on a fishing charter boat again yesterday, in particular because I was in the company of good friends both serving and retired RAF. Originally we had Colin De Block’s boat Lead Us booked for Sunday, but after looking at the weekend weather forecast and having a cancellation for yesterday, boat skipper Colin prudently decided to alter the booking.

Lead Us Sets Off

To avoid excess traffic disruption, the road bridge that crosses over the harbour entrance at Lowestoft only opens at set times and it meant an early start for all of us to catch the 7am opening. Once through the bridge, we led a small flotilla of catamaran support and transfer vessels out into the open sea, where Colin turned Lead Us to the north towards his first chosen mark. 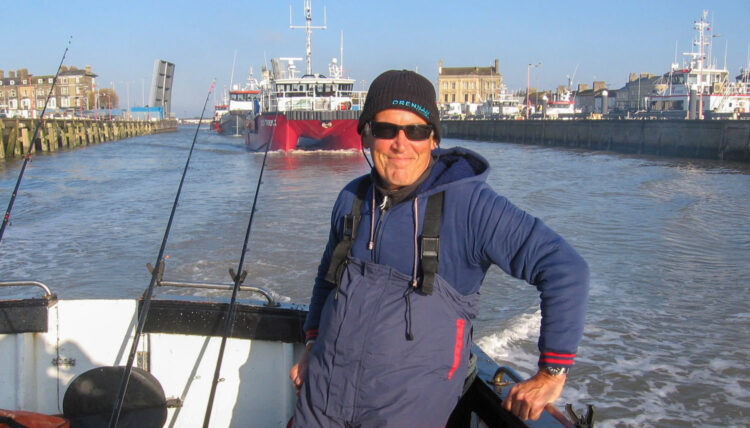 Chas resting his back in preparation for battles with large fish

After a relatively short passage in a calm sea, with the sun risen nicely in the sky, Colin slowed the boat to find a single-crewed Warrior 16 sat exactly where he wanted to anchor. As Colin anchored Lead Us a safe separation distance to the east, the guy on the Warrior brought aboard a succession of whiting and dogfish and appeared to be struggling to keep up with baiting up the three rods he was using, so things were looking promising!

As soon as the boat was nicely settled on the anchor, Colin gave the all clear for lines down. I’ve been struggling with a bad back, so instead of going flat out for smaller fish in competition mode, I decided to fish just one rod with bigger baits, to try and hook up with something decent and have a relaxing day. Everyone else was using two rods and soon the inevitable dogs, some decent whiting and small hounds started to come aboard. 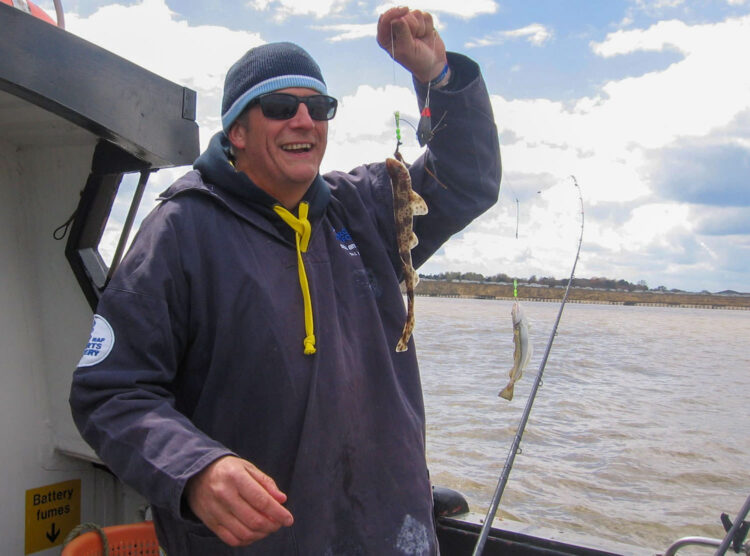 Meanwhile, I tied a Cox and Rawle 5/0 onto a span of 40lb fluorocarbon line, put on a whole large hermit crab, courtesy of Matt Overton of Sukat Fisheries, chucked it across and into the tide, then sat down on my box to relax my back.

Colin soon had the kettle on and took the order for teas or coffees, then passed round the first of many cups, that were most welcome throughout the day. Our group was one short due to one that couldn’t make it due to the date change, shame about that Scotty, so Colin came out of his cabin to fish next to me. He cast a two hook rig uptide and soon his rod was bouncing away with a dogfish on the worm baited top hook and a small smoothhound on the other peeler baited hook. 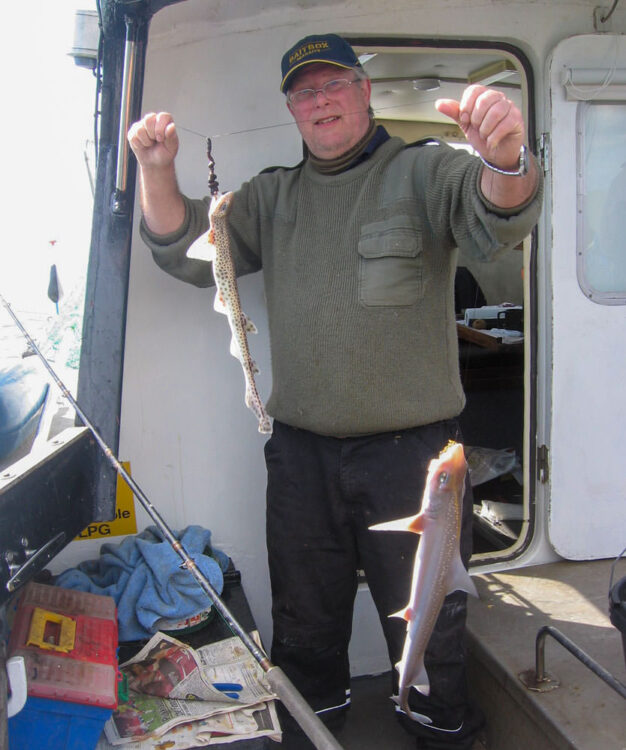 Skipper Colin with a dog and hound double shot

I was struggling on the hermit baited rig though, missing bouncing hound bites completely, or dropping hounds on the retrieve. But I persisted with the same method, hoping for the one lunker fish that would make my day.

Lead Us On The Move

Eventually the tide run died away and Colin decided to move out to a deeper mark that would hopefully offer us some more run. His new boat is a lot faster than the previous Lead Us and we were soon fishing on the new mark, where Colin fired up the cooker to warm up the first batch of sausage rolls for his hungry customers. 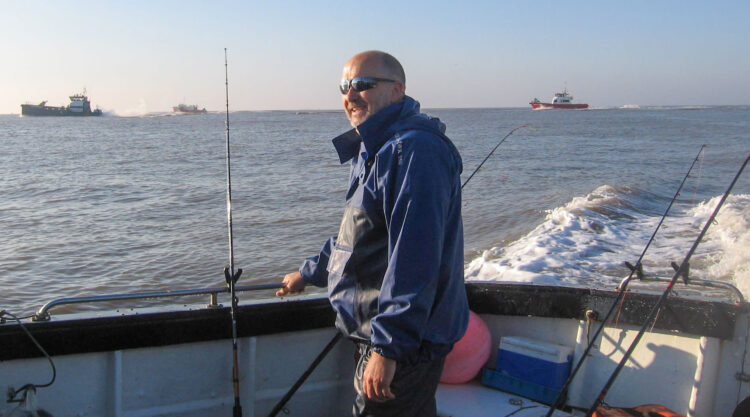 Nige enjoying the moment as the fleet goes their separate ways

I had managed just one dogfish on the first mark, that had succeeded in getting its greedy jaws round a whole hermit. But unfortunately the larger fish didn’t come out to play for me on the second mark either and the big baits went largely untouched. Although a smattering of dogs, whiting and small hounds continued to come aboard for my mates around the boat.

All too soon the tide run died again and Colin announced a final move inshore again to catch the run after slack water. Once anchored, I changed tactics to a standard up and over clipped shore rig, with a Kamasan B940S and Chinu 2/0 pennel rig.

Once baited with a peeler crab and hermit tail cocktail, I clipped the rig and cast it away from the boat. The result was almost instantaneous, with a half decent hound tripping the lead downtide and after a brief struggle, lifted aboard. 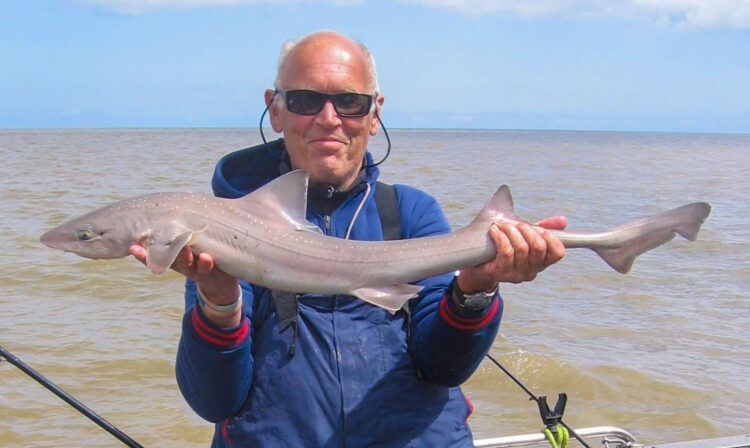 The author with the feisty hound that impersonated a double

Significantly, the hound was hooked neatly on the upper Chinu, with the rest of the bait hanging outside the mouth. A quick wrap of the same bait with crab elastic and the rig was launched to the same area, where a repeat process resulted in another hound of similar size, again hooked on the Chinu hook. Next cast soon resulted in a dreaded dogfish which destroyed the crab cocktail, so my thoughts of catching hound after hound on the same bait were not realised. 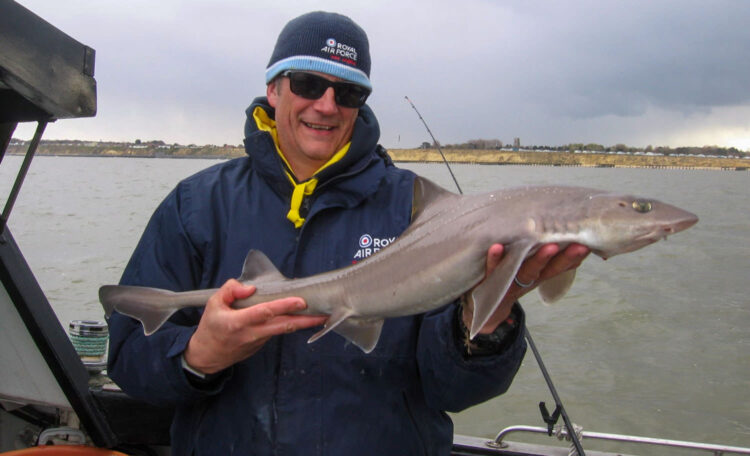 Everyone around the boat was catching, with Wiggy at the back of the boat catching a decent hound of over 8lb, amongst the stream of dogs and whiting. Daz was doing well too at starboard cabin boy position, bringing a couple of 8lb plus hounds to the net, as he edged closer to his target of ten hounds for the day. Nige and his brother Steve were also catching plenty of fish, so it was all most enjoyable. 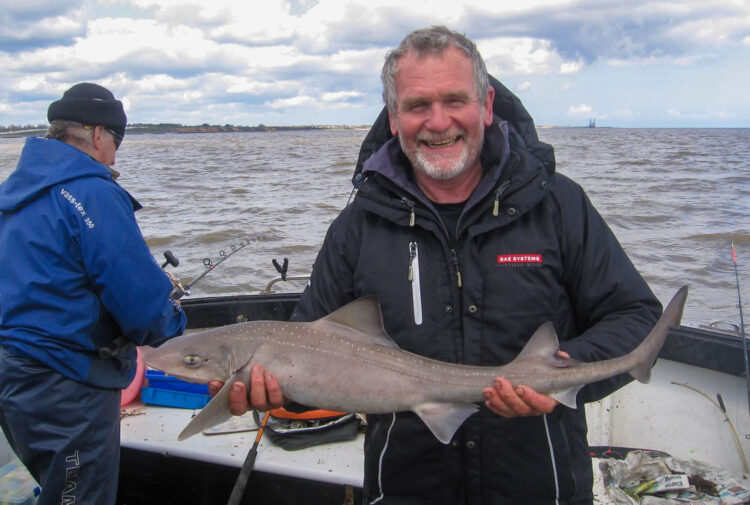 Wiggy looking happy with his chubby hound, with Steve in the background

Colin was busy with the kettle and sausage roll production line, so I was watching his rod tip, which was directly in my line of sight. I was calling out bite after bite for him, but he was suffering from my earlier woes, missing bites and losing fish. Then I had a relatively gentle bite on my rod and hooked into a really feisty hound, that gave a good account of itself, taking line against the drag. The way it fought, I could have sworn it was the first double of the day, but was a bit disappointed when it only took the scales round to 8.5lb.

Time To Catch The Bridge

Daz reached his target of ten hounds, then Colin called lines up at 15:10, so we could get back in to catch the next bridge opening at 16:00. His rod had been gently knocking and as he went to pull in, it was obvious there was something decent pulling back on the end. After a short but lively battle, I was on successful netting duty as a cracking 12lb plus female hound surfaced, which was a new PB for Colin. So a perfect end to a really nice day’s fishing. 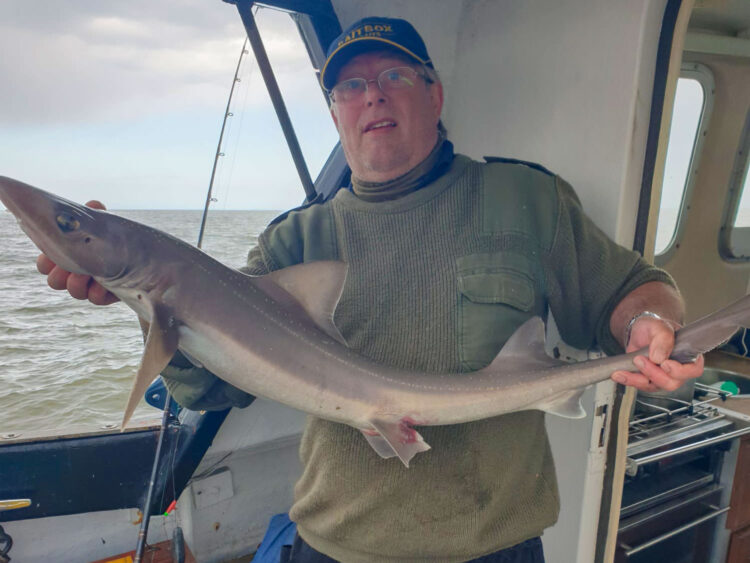 If you fancy a good day out with a hard working skipper on a decent boat, I can highly recommend a trip with Colin and Lead Us charters – 07803 270798.